Mount Surprise is a railway town on the Cairns to Forsayth Railway and is the first town within the Gulf Savannah encountered by visitors approaching from the east. It is a centre for gem fossicking, with quantities of topaz, quartz, spinel, garnet, cairngorm and aquamarine to be found. Mount Surprise sits on the edge of an immense lava flow from an ancient volcano to the south east. The surrounding country is flat, wooded savannah grasslands, with isolated hills.

The Gulf Savannah is an interesting region to visit all year, however, during the monsoon season, transportation methods must be carefully considered, as some parts of the Gulf Savannah region suffer from a lack of road infrastructure. 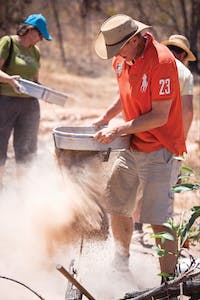