Millstream Falls is reputedly Australia’s widest single-drop waterfall. The falls flow over the edge of a columnar basalt lava flow, a legacy of the Atherton Tableland’s volcanic past. Millstream Falls National Park is on the western edge of the World Heritage Area. These are the widest falls in Australia, spilling over an old basalt lava flow. Here in the rain shadow of the eastern dividing ranges, the dry open woodland vegetation offers a stark contrast to the rainforest only kilometres away. This park was the site of an army camp during World War II and many former soldiers make nostalgic visits to remember those times. 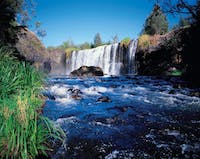