With an ocean that can feel as vast as space, it’s no surprise that an interaction with a dwarf minke whale can feel as otherworldly as a scene from Star Wars. Clinging to a rope armed with a mask and snorkel, a mechanical sound nicknamed the ‘Star Wars sound’ reverberates through your entire body as an almost fluorescent body glides past you reflecting the sunlight above.

While you may not feel like the word dwarf aptly describes the creature that dwarfs you in comparison, these whales – up to eight-metres long and almost six-tonnes heavy – are almost two metres smaller than their other minke whale cousins. Minke whales are among the smallest baleen whale species and it wasn’t until the 1980s that scientists recognised the different species of minkes, including the dwarf minke subspecies. Through acoustic monitoring, scientists were able to differentiate the sounds of the dwarfs from the other minke species, further reinforcing their subclassification. Little is still known about the pocket-sized whale but the Great Barrier Reef is the only known predictable aggregation in the world and the only place where people are able to swim alongside this majestic creature. It is believed the population arrive annually between Port Douglas and Lizard Island from subantarctic waters, via migration along Australia’s east coast, however research is still underway to understand their migratory patterns.

One thing that is understood is their inherently curious nature, actively seeking out and maintaining long contact with vessels in the water. A small number of tour boats operate under a special licence that offers divers and snorkelers the rare privilege of interacting with the little whales. Interactions are purely dictated by the minkes, with boat engines cut and set adrift when a pod is spotted. Swimmers entering the water must maintain contact with a rope trailing from the boat and await the inquisitive whales who seem to enjoy showing off and typically come to investigate. Mike Ball Minke Whale Dive Expeditions claim a 98% success rate with the longest encounter lasting 10 hours and the largest pod consisting of 28 whales. If your expedition doesn’t encounter these friendly animals, the Ribbon Reefs are noted as one of Tropical North Queensland’s best dive sights so you can explore the other animal and coral life that make Barrier Reef great. Sometimes likened to a dolphin, dwarf minkes are highly manoeuvrable and acrobatic and are known to occasionally breach. If you’re lucky you may witness uncommon behaviours such as a headrise, where the whale rises vertically, exposing its snout above the surface; or the spy-hop – the same move but with its eyes above the surface. Sometimes they will lateral roll and display its belly which gives an opportunity to determine the sex of the whale. Such information is important for ongoing research and divers are encouraged to contribute any photos or observations to the Minke Whale Project. Each dwarf exhibits their own unique colouring and markings as distinctive as a human fingerprint so this allows researchers to follow the behaviours of individual whales. There’s still a lot to learn about the not-so-little dwarfs and all those who get the privilege to encounter them can contribute to the future understanding of these gentle mammals. Liveaboard Expeditions leave from Cairns to the Ribbon Reefs in June and July, typically for 3 to 7 days, with Mike Ball Dive Expeditions, Divers Den, Spirit of Freedom or Pro Dive. The liveaboards provide a dedicated itinerary for minke whale interactions and offer an exclusive in-water experience unlike any other. While you can scuba with the whales, most interactions occur with snorkellers so if you haven’t dived before fear not, you can still experience the once-in-a-lifetime opportunity firsthand. Imagine the goosebumps moment when a creature around four-times your size comes within mere metres of contact – a moment so incredible it will stick with you for life.

Great by name, great by nature

Tropical paradise and the world’s largest coral reef: dreams are made of this. As you’d expect from one of the seven Natural Wonders of the World, the Great Barrier Reef is home to some weird, wonderful and just plain loveable creatures. Here’s 25 fun Great Barrier Reef facts about a marine world larger than Italy. Diving 101 – Everything you need to know about scuba diving

Have you ever dreamed of scuba diving the Great Barrier Reef? Just imagine sinking down into the warm waters, exploring coral gardens and seeing this wondrous world through the eyes of a fish. Learning to scuba dive is easy and is your passport to a brave new world. Here are answers to some frequently asked questions about learning to Scuba Dive. 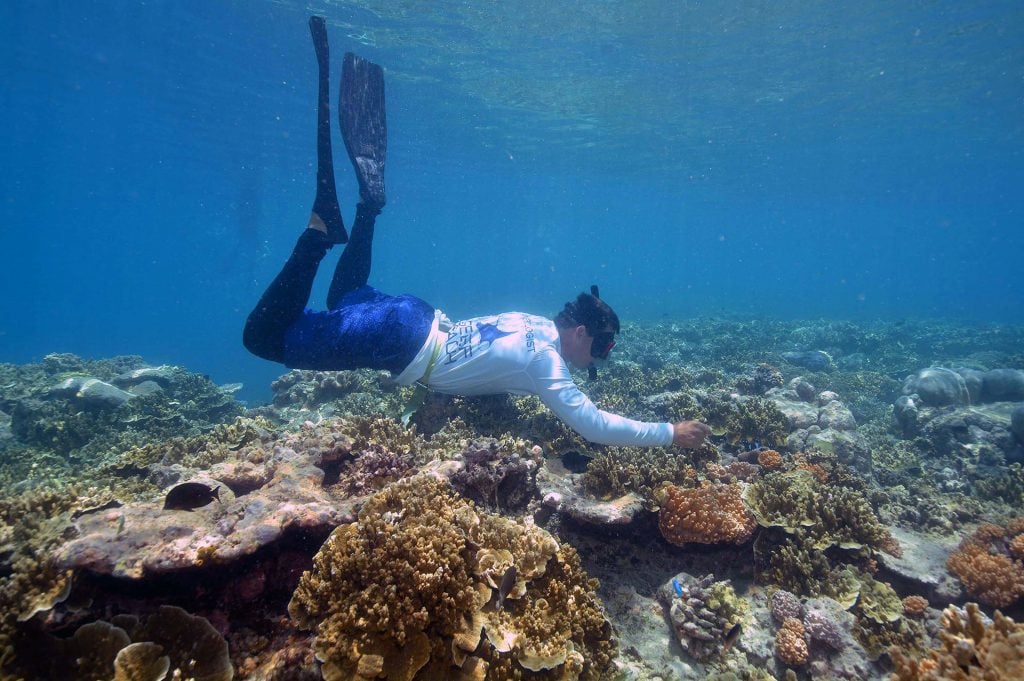 The Great Barrier Reef is a thriving, living marine environment. It inspires all who visit, even those who see it every day, like marine biologist and owner of Reef Teach, Gareth Phillips. Sleep under the stars on the reef

Is the Great Barrier Reef at the top of your travel bucket list? How about seeing the uninterrupted Southern night skies? Sunlover by Starlight gives you 48 hours of wanderlust-inducing experiences tied with a bow of exclusive reef tours, scrumptious food and five-star treatment. The Great Barrier Reef is an extraordinary mosaic of coloured corals spotted with curious creatures. While the threats to its future are real and immediate, it’s important to know that there are many things you can do to help. Lizard Island – The northern-most resort on the Great Barrier Reef

Surrounded by pristine turquoise waters that will make you question whether you’re in a dream, discover the true meaning of tropical oasis at the exclusive and ultra-luxurious, Lizard Island. We’ve all seen those gorgeous wisps of whiteness poking out from an azure sea on Great Barrier Reef. But what are they? More importantly, where are they? And how can we get a piece of sand cay action? I’m here to reveal all. Spanning over 2,000kms discover the weird, the wonderful and the amazing of one the world’s natural wonders.